Bob Grossman
CEPro
Added to IoTplaybook or last updated on: 08/01/2018

To a large extent, network switches are becoming (or have become) commodity items. At a given price range there are more similarities than differences; with durability, throughput, and features marching in lock-step up the price range for different manufacturers.

Low-end switches are unmanaged, and the PoE models are just fine for low power devices. Higher-end units are often managed, giving you a host of features accessed through a browser-based menu, and have more robust construction.

So it takes some special sauce for us to review a network switch these days. Ruggedized switches get our attention as we deal with harsh environments from time to time. And managed switches that have simple interfaces but useful features, like the MAC address bonding included in the network switch portion of the Salient RED3 server.

Surprisingly, a product that at first looked like a plain vanilla network switch with a few gimmicks thrown in wound up in that category.

TRENDnet has been involved in the electronics world since 1990 and was founded in Torrance, Calif. The company has been building network solutions for the consumer, commercial and industrial markets and today supplies many different solutions.

The company has several vertical market products, including AV and NVR switches. The TPE-3018L 18-port Gigabit NVR PoE+ switch is from the NVR line that also includes a “sort of ” 12-port model.

As far as we can tell, these are the only two models to include the surprisingly useful LED display that initially turned us off as being a gimmick.

The TPE-3018L network switch is constructed with a hardened metal casing and can be used in either a desktop or (with the included rack ears) rack mount configuration. It is roomier than a lot of similar products, at 11 inches deep and just over 17 inches wide, with good reason as we’ll later discuss.

The rubber feet (for desktop use) are pre-attached, rather than stick-on as with many similar products; if you have equipment above and below it in a rack, you may want to peel the feet off.

And you can stack these units; our test unit ran very cool and ventilation is through the sides and back. The unit has a solid feel to it, shows good construction and has an excellent operating range for a nonhardened product, at 0° to 40° C / 32° to 104° F. 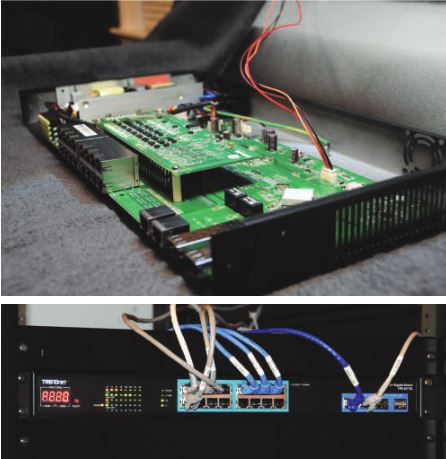 Internally (top) the TPE-3018L is configured to
be a 26-port model, with good ventilation;
externally the four-digit, seven-segment LED
display (bottom) is a highlight.

The switch has a total of 18 network ports, with 16 PoE+ and two non-PoE uplink ports that are each shared with a corresponding SFP slot for fiber-optic modules.

The 12-port version allows all ports (eight PoE+, two uplink and two SFP) to be used simultaneously, but we see that as unlikely in real-world use.

Interestingly, the TPE-3018L is internally configured to also be a 26-port model, with unpopulated areas on the main circuit board and a daughter card.

Read Next: If Amazon Sells Homeowners Insurance with Security and IoT, Game Over?

Internally (top) the TPE-3018L is configured to be a 26-port model, with good ventilation; externally the four-digit, seven-segment LED display (bottom) is a highlight.

TRENDnet does not appear to make such a model in any other product line (there are some 28-port PoE+ models but the status LED locations indicate a different internal configuration), leading us to believe there may be plans to expand this model line if needed.

The power connection is by means of an IEC 320 socket on the back, coupled with a power switch. Total power draw is rated at 4A, with a voltage range of 100-240VAC, 50/60Hz, making this pretty much a global product.

The thermal design on this unit is noteworthy. The power supply, which provides a power budget of 220W for PoE, is mounted on the left, with one side using the case for a heatsink and the other side using an aluminum plate.

Heat dissipates nicely with a fan drawing air through the channel that is created. The other portion of the case has a hole for a second cooling fan and a header for it on the circuit board, but a second fan is not provided and doesn’t appear to be needed. Perhaps on the 26-port model?

The TPE-3018L can supply up to 30W of PoE/PoE+ power for all 16 of its PoE ports. More importantly, the provided 220W power budget is far greater than most competing products that typically range from 125W to 180W; in fact, we could not find a non-TRENDnet product that matched this one, although I’m sure there are some out there.

Looking at the power draw on our test system showed fixed cameras ranging from 2.4W to 8.3W, with 3W or less being more typical. PTZ cameras typically run to about a 23W maximum and about 9W nominal, so you can see the flexibility this size of a power budget provides.

For practical purposes, this switch will likely handle anything you throw at it. The two defining features of this product are the added ports and the four-digit, seven-segment LED display.

We immediately saw the value of the two added ports; TRENDnet tells you it is intended for NVRs, allowing you to connect 16 cameras, an NVR and a workstation or NAS device, and we agree that is a practical use.

Of equal importance is the ability to plug something into a non-PoE port for testing, or just to be conservative. We’ve all run across questionable products that we didn’t necessarily want to power through a switch, and this device allows you that flexibility that would normally require a managed switch with ports disabled.

The LED display grew on us. Pressing the button next to it cycles you through a readout of the available power (always 220 in our case), available power (total power, less the amount already being provided to connected devices) and power per port.

The display doesn’t time out either, so if you want to leave it up on a particular port to monitor it, you can. Outside of these features, it is a pretty standard switch, albeit one with a very robust backbone — it is rated to handle 36Gbps switching capacity, which means you can theoretically run 2Gbps across all ports (1Gbps in each direction) simultaneously.

You can’t do any better than that with any product, as this is the theoretical maximum of Gigabit ports. Another feature worth mentioning: a lifetime warranty on everything but the cooling fan and internal power supply, which carry a one-year warranty.

As previously mentioned, we’re not always excited about reviewing network switches, so the TPE-318L sat in our test lab for longer than it should have. Over the summer, we decided to install some cameras in our warehouse building, which is about 150 feet from our office and is unconditioned space.

Without thinking, we grabbed the TPE-3018L, installed it in an open frame rack and connected various devices including a Ubiquiti wireless link back to our office, a WiFi access point and various PoE cameras.

We immediately appreciated the LED display; connect a camera and you almost immediately see the power draw. No waiting for boot-up, no browser needed, just pushbutton diagnostics.

It was better than an LED showing PoE was on, not as good as full managed switch diagnostics, but perfect for troubleshooting installations quickly and easily. In fact, if I were an integrator installing higher-end managed switches, I might consider buying one of these for initial connection and configuration, swapping it out later as needed.

For smaller or unmanaged installations, however, this would be my go-to switch. We did some real-world bandwidth tests as well, connecting streaming devices (TiVo Mini and Amazon Fire TV) in addition to the cameras, which were streamed at full frame rate and resolution.

Over an extended test period of several months we never saw a dropout, and ambient temperatures ranged from freezing to 90° F. Truth be told, we didn’t want to give this little switch back and ultimately arranged to purchase our demo from TRENDnet.

The TPE-3018L is a great little end-point switch with a built-in diagnostics tool that is surprisingly handy. With a best-in-class power budget and unbeatable performance, it is worth a slight premium over comparable but lesser switches.

Don’t think of it as an NVR switch, though, or you’ll be selling it short for other PoE applications.

CE Pro magazine is the leading trade publication for professionals involved in the custom electronics business. Our readers specify and sell technology-related products to homeowners, home builders and SMB owners.

This article was originally published at CEPro. It was added to IoTplaybook or last modified on 08/01/2018.
Topic:
Components
Networking
PoE
Verticals:
Commercial
Education
Residential
Retail