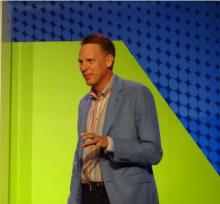 The latest Tech Data Partner Summit, which took place this week in Chicago, was built around a four-word theme meant to convey the urgency of transforming outdated business models for a new era of IT: “Unlearn yesterday. Breakthrough tomorrow.”

It’s a message most channel pros still need to hear at a time of escalating demand for end-to-end solutions, rather than products, and skyrocketing adoption of next-generation technologies like cloud computing and the Internet of Things. Based on conversations with company leaders, however, a different four-word phrase arguably applies to Tech Data’s own transformation: “Been there. Done that.”

Indeed, according to Senior Vice President of North American Sales Marty Bauerlein, the multi-year transition from distributor to solutions aggregator that Tech Data commenced some two and a half years ago with its $2.6 billion purchase of Avnet Technology Solutions is now largely complete.

Not that paying the bills has been a problem for Tech Data lately. The $37.2 billion in revenue it reported in its 2018 fiscal year represents an 11% gain over 2017 results, and the company’s gross revenue from SMBs climbed over 23% in fiscal 2018. Moreover, while Tech Data’s traditional fulfillment business remains healthy, what’s fueling its growth is clear: Advanced solutions of the kind made possible by the Avnet acquisition currently account for 70% of net sales.

According to Bauerlein, such figures are evidence that Tech Data has in fact moved beyond transformation to execution. “We’re in perform mode, and our performance has been stellar,” he says.

In May, for example, the company unveiled an IoT “solution factory” tasked with churning out complete, market-ready solutions in core vertical industries. Modeled after a similar operation for cloud computing that launched 16 new “click-to-run” solutions for data protection and other scenarios in July, the IoT factory shipped its first 30 solutions that same month, and has many more coming, according to Lisa McGarvey, Tech Data’s manager of IoT solution development for North America.

“We’re looking at updating our solution catalog quarterly,” she says, adding that a steady stream of IoT vendors will be joining the Tech Data line card in coming months too.

“Within our North America team, we now have someone who reports to Colin [Blair, Tech Data’s vice president of IoT and analytics solutions for the Americas] who focuses on vendor recruitment and management specifically for IoT and analytics,” McGarvey reports.

A separate team dedicated to security and led by Vice President of Global Security Solutions Francisco Criado showcased several forthcoming resources of its own at the Partner Summit, including a state-of-the-art 4,000 square foot “cyber range” presently under construction in Tempe, Ariz. Set to open this November in conjunction with Tech Data’s first-ever security solutions conference, the facility will allow channel pros to get training, demo solutions for customers, participate in hackathons, host events, and more.

“That’s going to give us instant credibility and just a lot more engagement with partners and with the right customers and hopefully even students,” says Criado, who calls educating future security experts part of the cyber range’s mission. “I want to be part of the solution when it comes to the cybersecurity skill shortage in the market,” he states.

Due as well in the fourth quarter of the year is a new “complementary solutions matrix” designed to promote cross-selling by identifying which additional security solutions a given customer is likely to buy based on the ones they already have.

“It’s always a multi-vendor environment when it comes to security,” says Alex Ryals, Tech Data’s vice president of security solutions for the Americas, who adds that the average SMB uses 12 to 15 security solutions. “Our idea is to make it easier for our channel to understand what to sell given that.”

Coming soon also is a comprehensive guide to subscription-priced managed security offerings called RECON MSP. “That probably doesn’t seem earth shattering, but it’s really hard as a business partner to catalog all this yourself from the different vendors,” Criado says. Having that information, he adds, will help traditional resellers add as-a-service security solutions to their offerings.

“The market is demanding this type of consumption model,” said Criado this week in a keynote presentation. “It’s a much more predictable profit stream for your business.”

Further evidence of Tech Data’s transform-to-perform switch is the growing momentum behind its Practice Builder enablement offering. Introduced late in 2017 and designed to teach resellers how to become full-fledged solution providers in next-generation disciplines, the program was originally available only in multiday, face-to-face engagements that limited access to a relative handful of partners a year. New digital courses officially introduced last October are now dramatically expanding Practice Builder’s reach, however. More than 1,300 partners completed the online edition of the cloud Practice Builder alone, for example, in the first two quarters of Tech Data’s current fiscal year.

The IoT specialist group, for its part, completed a 20-city series of in-person Practice Builder workshops last month, and plans to do similar roadshows in the future. Coming next year as well is the first Practice Builder for mobility.

“Mobile is a little bit different in the sense that it’s not just the typical hardware components,” says Director of Mobility Solutions Dylan Leach. “There is this connectivity piece which a lot of our partners haven’t traditionally played in, so we really want to embrace that Practice Builder methodology to help them understand how to play in the connectivity space and the knowledge and the technical expertise they need to have.”

A mobility solution factory is in the works as well, Leach adds, along with a portal (akin to the Cisco order management tool Tech Data updated this week) that partners can use to provision and manage bundled combinations of mobile hardware and services.

According to Bauerlein, channel pros should only expect the tempo of post-transformation activity from Tech Data to increase in the months to come.

“We’re playing offense,” he says, “and in a world of accelerating change, offense wins.”

How LoRaWAN and AI at the Edge Revolutionize the IoT