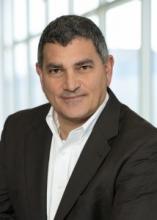 Invoking the memory of Andy Grove, the legendary Intel CEO who passed away last week, speakers today at the 2016 Intel Solutions Summit in Kissimmee, Fla., encouraged partners to cultivate both emerging markets like the Internet of Things and traditional ones like notebook PCs this year.

“Right now we’re seeing a pace of transformation and revolution that’s unprecedented,” said CJ Bruno (pictured), Intel’s vice president and general manager of the Americas in a morning keynote. “For us, just like Andy taught us, transformation equals opportunity for every single person and every single company in this room.”

Intel views the Internet of Things as an especially significant opportunity. Though some 25,000 Intel partners participate in that market in some capacity already, Bruno encouraged his audience to join Intel in making this the year the Internet of Things becomes a real-world, present-day contributor to top line sales.

“It’s time for this room to lead the world at shifting from IoT hype to IoT revenue,” he said.

According to Intel, SMB-focused channel partners can make money on the Internet of Things today in a variety of market segments, including the retail, building management, agriculture, and digital signage spaces. The key is educating yourself about what’s possible with IoT technologies and finding collaborators who can help you deliver end-to-end solutions linking devices and sensors to networks, the cloud, and back-end business analytics tools.

“The demand is huge. It’s up to us to satisfy it,” Bruno said.

The same goes for solid-state drives, he added, stating that exploding data volumes and an associated need for high-performance storage are turning SSDs into a market that will be worth $20 billion globally by 2020.

“20 billion of anything is a lot,” observed Bruno, who urged partners to transition customers from older SATA-based SSDs to speedier, higher-density models utilizing the newer NVMe interface soon.

“Please future proof yourself,” he said, from the NVMe adoption wave that will be coming this year.

And Don’t Forget the PC
Intel also devoted serious attention today to small form-factor PCs, including the Intel NUC mini-PC and the newer Intel Compute Stick, a device about the size of a USB flash memory drive that turns any TV or display with a spare HDMI socket into a full-fledged x86 PC.

While the NUC, company executives stated, has firmly established itself as both a consumer media player and commercial platform for digital signage, point-of-sale, video surveillance, and thin client computing solutions, it’s still too early to say exactly how and where the Intel Compute Stick and products like it will catch on with partners.

“We think it's going to unlock some new opportunities for partners,” said Todd Garrigues, Intel’s director of North American channel marketing. What those will be, though, is still hard to predict. That’s a sentiment echoed by John Deatherage, director of product marketing in Intel’s channel innovation and solutions division.

“The jury’s still out,” he said in a meeting with media representatives. “It'll probably take us a few more years to get that category going.”

Still, Intel believes Compute Sticks are likely to show up eventually in point-of-sale solutions, kiosks, and surveillance systems, as well as call centers and other cramped environments where a compact PC that emits less heat than bigger devices could hold strong appeal, especially as new models featuring more poweful Intel Core-M processors reach market in May.

For all its talk about new sales opportunities, however, Intel identified conventional PC form factors like notebooks and 2-in-1s as important focus areas for 2016 too.

“It’s time for everyone in this room to drive refresh of your PC fleet,” Bruno said during his keynote.

According to Intel, products in the 6th Generation Intel Core vPro processor family, which is based on the company’s Skylake CPU architecture, enable PCs to deliver 2.5 times better performance and three times longer battery life in chassis half the weight and thickness of the models they replace.

The first is a trade-in program providing $100 discounts to buyers who upgrade an existing PC. Funded jointly by Intel and Microsoft, that offer goes into effect this week.

Additional promotions introduced today include ways for partners in the Gold and Platinum tiers of the Intel Technology Provider program to earn extra points that they can redeem for business rewards. For example, in another offer co-funded by Microsoft, partners who sell any Core i5 or i7 system together with Windows 10 Pro can earn triple the normal points. Similarly, in the data center space, partners who sell select Xeon E5 v3 processors, eligible RAID and compute modules, or eligible S3100 series SSDs will earn double the normal points, plus bonus points if they sell all three.

Those and other points-related offers are scheduled to go into effect April 10th.

What Is Deep Learning?

What is the new IAS MIPI sensor interface?