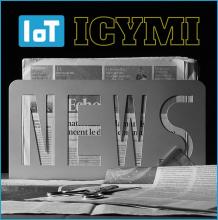 More than 115,000 people attended CES 2023 earlier this month, almost 3x more than last year. Reviews were mixed, as usual, since consumer media loves to highlight “concept” products like flying cars, virtual reality, and robots, lots and lots of robots. Example? The barista robot that might misspell your name in Lucida console font if it ever reaches a store. These newsbits, however, are sure fire.

Amazon at CES 2023 talked and demonstrated plenty of IoT tools, including AWS IoT support for Matter. Not unexpected, since Amazon helped develop the standard, but still nice.

Parks Associates lists its “Top 10 Insights” for the smart home, including how insurance companies are getting involved with various smart home product vendors.

Who wants to refresh batteries in IoT devices every few months? Nobody, which is why a new industry standard from the AirFuel Alliance merits mention. AirFuel RF can send 1 watt to a device wirelessly.

IoT security exploits are on the dark web, where tools to infiltrate cars and medical devices are popular with criminals. Nothing nerve-wracking there, right?