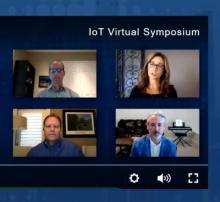 Don’t wait for an end to global uncertainty or for the economy to stabilize before entering the Internet of Things market, warns Tech Data. Sales of IoT solutions are gaining steam this year despite the spread of COVID-19, and channel pros who fail to get in on that trend may regret it.

“This is the time to invest,” says Colin Blair, Tech Data’s vice president of Internet of Things and data solutions for the Americas.

Blair spoke with ChannelPro on the eve of the distributor’s IoT Virtual Symposium, which took place online today. Convincing partners to capitalize on growing demand for IoT hardware, software, and services was one of that event’s main objectives.

Blair and his colleagues have their work cut out for them, based on data from analyst firm and consultancy The 2112 Group which found that only 11% of solution providers saw IoT as a growth opportunity as of the start of the year.

“It’s still, to many, one of those opportunities of the future, or an opportunity that’s for somebody else,” said 2112 Group President and CEO Larry Walsh during a conference session today.

Partners who’ve made IoT a present-day priority, however, are cashing in on what remains robust spending despite the coronavirus pandemic. Indeed, IoT spending will climb 8.2% in 2020 to $742 billion, according to IDC. That’s well below the 14.9% growth the analyst projected before COVID-19’s arrival, but significantly above expectations for IT spending overall, which IDC says will decline 5.1% this year.

Interest in IoT solutions is regaining lost momentum too, according to Stacy Crook, a research director in IDC’s IoT ecosystem and trends research practice who spoke at the symposium today. IDC has been surveying businesses about spending intentions every two weeks since April, she noted, and while 20% of respondents planned to increase IoT outlays back then, 34% said the same in the most recent poll.

“That’s a 14% jump from the first time we ran the survey,” Crook observed, “so we do see that return to spending starting to happen now.”

Tech Data is experiencing growth in IoT sales too despite macroeconomic headwinds. “These last six months, we’re seeing material traction in this space,” says Blair, who credits several factors for that development.

For starters, the rapid embrace of work-from-home computing has “really given a shot in the arm” to a migration of workloads toward the edge of the network that has been underway for years. In addition, Blair and other speakers noted today, the pandemic has sparked interest in a wide range of solutions designed to make offices, schools, and other shared spaces safer. Those include thermal scanning systems that can help identify people infected by COVID-19, systems that measure adherence to physical distancing requirements, and contact tracing applications.

Content at today’s symposium called attention as well to rising adoption of IoT solutions that have nothing to do with COVID-19. For example, manufacturers who haven’t previously needed help from channel pros on the factory floor are increasingly deploying internet-enabled hardware in production facilities.

“Those are opportunities that weren’t necessarily available to the IT channel in the past,” Blair notes. “We’re seeing that once things get an IP address, there’s a need to put them on a network.”

Crook, too, highlighted manufacturing as a rapidly emerging IoT opportunity. In fact, companies in that vertical call IoT the most important new technology they’ll leverage to enhance product and service innovation in the next 12 to 24 months, according to IDC research.

Even channel pros without specialized IoT skills can contribute to that journey, Blair noted in a keynote presentation this morning. “It’s not just about the devices,” he said. “The infrastructure that’s associated with the Internet of Things is pretty significant.” IDC, for example, expects IoT devices to generate 79.4 zettabytes of data in 2025, fueling heightened need for storage capacity.

Forecasts like that, according to Blair, underscore the degree to which everyone from VARs and integrators to hardware makers and software developers has a role to play in the IoT ecosystem. “We feel like IoT does not discriminate in the channel. There are market opportunities for everybody, with almost no exceptions,” he says.

Blair points to solutions built around IP-enabled video cameras as an example of entry-level openings for even the newest newcomer to IoT. “They’re not complicated,” he notes of such systems, and can be used for surveillance and physical security as well as for only slightly more complex purposes like “geofencing” systems that notify businesses when property and people enter or exit virtual boundaries.

Solutions like that “are just one adjacency removed,” Blair notes, from more sophisticated applications involving thermal cameras that partners can also learn to deliver and support. “That’s just relying upon your distributor partner to have the expertise and the relationships with companies that do that kind of work,” he says.

IoT is one of several next-generation technologies that continue to deliver robust returns despite the pandemic, says Tech Data, along with cloud computing, security, and endpoint solutions. The company has put those four fields at the center of its long-term growth strategy.