Nonprofits Profit from the Internet of Things 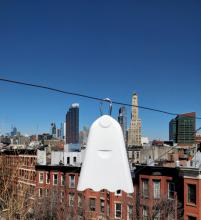 A wide variety of companies are finding value in the Internet of Things (IoT), and nonprofit organizations are no exception.

One example is the AirBeam, created by HabitatMap, a Brooklyn-based nonprofit. The $249 sensor measures fine particulate matter in the air. HabitatMap then uses that data to create a worldwide map of air quality. The company’s database now has a billion measurements, and gains another 50 or so sessions per day, says HabitatMap Executive Director Michael Heimbinder.

First developed in 2014, the AirBeam device is now smaller, lighter, more accurate, and can use Wi-Fi and cellular data networks as well as the Bluetooth connection it used originally. In addition, the new version is weather-resistant, so it can run inside or outside a house. “It’s survived almost 0 degrees here in New York,” Heimbinder says.

HabitatMap developed the device with help from contract staff, adds Heimbinder, who is the firm’s only employee. “We’ve had multiple firmware developers, we’ve worked with multiple electrical and mechanical engineers, and we’re always working with software developers,” he says.

Lunar Logic, a Ruby on Rails developer based in Krakow, Poland, is HabitatMap’s primary coding team and has been working with the nonprofit since 2007. “I’ve never met him in person,” Heimbinder says of his contact there, Radosław Wieczorek. The company did about two weeks’ worth of free development work, not just to see whether it could do the work, but to determine whether HabitatMap was a good client, Heimbinder says.

HabitatMap has developed new ways to distribute the devices as well. “We’ve been surprised by our success in places like France, where the regulatory agency has really embraced it,” Heimbinder says. HabitatMap is also part of a smart cities group that has purchased a number of AirBeams to loan through libraries, he adds.

The organization targeted voice because speaking comes naturally to humans, we speak faster than we can type, voice searching is on the rise, and voice can offer more utility and efficiency in a healthcare setting, Maxwell notes.

The clinic also needed to mesh the Alexa skill with its other sources of information. “Mayo Clinic doesn’t abandon one channel (web) to support the next (voice assistant),” Maxwell says. “This requires an omnichannel-minded approach to creating, managing, and distributing your information. This leads to content engineering and semantic-enrichment techniques to try to future-proof content assets.” In other words, “create once and publish everywhere,” he says.

To develop the skill, Mayo Clinic worked with Orbita, which offers a conversational artificial intelligence platform. “We needed a voice-enabled content platform and editing toolset for our editors to adapt and optimize web content for a voice experience,” Maxwell says. “We collaborated with an external group that offered these and other capabilities, including guiding us through the design process, user testing, and Alexa skill certification.”

While the Mayo Clinic and HabitatMap cases demonstrate the present-day value of IoT to nonprofits, organizations anticipate expanding the technology’s role further. In particular, future nonprofits will likely use IoT for fundraising, by letting people donate through smart speakers, for example.