Joe Stanganelli
Added to IoTplaybook or last updated on: 09/20/2018 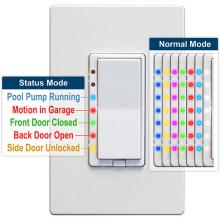 The primary pain point that residential smart lighting integrators suffer is their own collective failure in consumer outreach and education.

That’s according to Gary Russell, founder of LiveSmart Technologies, a residential and commercial IoT integrator based in the Orange County, Calif., area who has witnessed this problem firsthand. For every 20 to 25 consumers who would benefit from it, he estimates, fewer than three have installed smart lighting in their homes. Most of those customers, moreover, represent upsells during the installation of a smart thermostat and/or smart security camera. Relatively few customers ask integrators at the outset for smart lighting.

“We’re still in the upward trend,” says Russell. “[Consumers] don’t know all that’s possible. They maybe have a friend [who’s] got a Wi-Fi lightbulb, and they think it’s cool, but they would never get one.”

Analysts are coming to the same conclusion. In its Residential IoT Market Overview released in July 2018, Navigant Research pointed to plenty of untapped opportunity for smart lighting and other residential IoT integrators, but maintained that the timing still isn’t quite right.

“Until this market is more mature and accessible to the masses,” posits Navigant, “residential IoT growth will be limited.”

Part of the problem is that residential smart lighting has mostly been seen, and marketed, as little more than a novelty. Russell says that there’s more to it than mood lighting and entertaining light shows, however. LiveSmart has begun a social media consumer education campaign to demonstrate that the primary benefits of residential smart lighting are the same as those of many other IoT applications.

The first of those benefits is cost. With a business model that doesn’t rely upon recurring monthly revenue, says Russell, LiveSmart is able to keep smart lighting installations (hub included) to an up-front cost of about $300 to $350, allowing residential customers to quickly realize (and appreciate) utility savings of $20 to $50 a month.

Second is security, beyond even typical “dusk-to-dawn” lighting automation.

“[Say] I’m going to a party, or I’m going out of town. I want those lights to come on at irregular, unannounced times,” says Russell. “I want it to look much like the use profile of people being there in the home so I’m less likely to be burglarized by someone who’s casing the place for patterns.”

Even those who have already been convinced to install smart lighting at home, says Russell, need outreach and education. This applies both to contractors and do-it-yourselfers, who may find that they need technical support after a Home Depot run.

Some customers require a different kind of convincing: why they should get smart lighting from you. Russell separates himself from the crowd by highlighting his and his company’s engineering background with the help of a simple checklist of questions, including:

“Being an engineer of 34 years gives me a context that’s different from, say, an alarm installer. I say that as part of our selling message because you’ve got to know what your discriminators are,” says Russell. “I have to come up with something else, and that something else is: ‘Look, we’re engineers in home automation, and that’s what you’re going to get. We understand how this stuff works.’ And hopefully that’s worth something.”