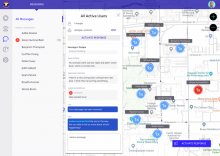 Educators in Houston are using Internet of Things technology to improve school safety. The project involves several companies, led by integrator Insight Enterprises, based in Tempe, Ariz., which is already working with the city on other smart city initiatives. This project is different, though.

“There are a number of entities involved because this is a larger initiative,” says Jeff Dodge, director of national solutions for digital innovation at Insight. “Insight is a solution aggregator for everything related to the deployment of the solution.” That includes hardware and software from 5,500 companies plus consulting services and custom software, he says.

Underlying the technology is Microsoft’s Azure cloud platform, including its IoT Hub service. Insight, meanwhile, contributes a suite of products known as Connected Safety that tracks safety sensors such as cameras, physical and virtual “panic buttons,” and noise and gunshot-triggering devices. The software also communicates outward to sensors such as smart LED bulbs and smart digital displays. Using these, a school can create a primary and secondary radius around an event to enhance situational awareness and help communicate evacuation plans, says Alexis Lavine, product manager for digital innovation at Insight.

The company is also partnering with BeSafe Technologies, of Raleigh, N.C., to offer consulting on how schools should prepare themselves for future incidents, Dodge says. BeSafe was founded in 1999, just after the Columbine shootings.

BeSafe ActiveShield creates high-fidelity maps, including evacuation maps, to show infrastructure such as where the plumbing runs, Dodge explains. “Developers’ blueprints can be confusing to first responders,” he says. “Does the door go in or out? Does it have glass? Can you see through it?”

“A dashboard allows you to see the locations of the IoT devices and interact with them,” Lavine adds. “ActiveShield appears as a building icon and you can drill into the building, open the floor plan, navigate around the school infrastructure, and see the devices.”

Houston’s Aldine Independent School District (AISD) is implementing a pilot using these products and services as part of an information technology infrastructure upgrade. The district is working with two schools, Stovall Middle School and Aldine High, because they’re next to each other on the same campus, Dodge says.

So far, the district has some physical devices such as cameras and smart digital displays in place. Insight and the other partners will incrementally augment functionality and continue to evaluate what devices to add.

Pricing has not yet been determined, but Insight hopes to be able to sell the solution to more schools, which require less individual integration than commercial clients, Dodge says. “Our intention is to go very broad,” and not attempt to make Insight’s investment back with this single customer.

At the time of this interview, it was still not determined when the project will move beyond the pilot phase and go live. “We’ve laid out a beta plan with AISD with multiple phases,” Dodge says. “Nothing will go live until they say they love everything, and the teachers understand it. We’re not putting a hard date on this but are more gated by milestones. We have tentative dates, but we’re not discussing them right now.”

The next phase to be deployed will be enabling an alert system with a mobile application, providing feedback and discovery as well as community notification. “Because the product was new, we were looking for a friendly partner to come on the journey with us,” Lavine says. “That will get it into the hands of the community and evolve it over time.”