IoT’s Time Has Come at Last for Ingram Micro 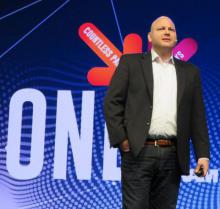 Slow but steady wins the race when it comes to the Internet of Things.

That’s according to Ingram Micro Inc. in conversations with ChannelPro this week at its ONE conference, in National Harbor, Md. While not a major player to date in a market that IDC expects to generate $772 billion in global revenue this year, the Irvine, Calif.-based distributor hasn’t been ignoring the IoT opportunity so much as waiting for the right moment to pounce on it.

“We were one of the ones that sat back a little bit on a topic that’s more complicated than many know,” says Kirk Robinson, Ingram’s senior vice president and U.S. country chief.

Indeed, while distributors like Tech Data Corp. and SYNNEX Corp. have been building out IoT line cards and rolling out IoT solutions backed by growing service and support organizations, Ingram by its own account has been patiently—and deliberately—biding its time while use cases evolved, products and platforms matured, and partner requirements came into focus.

“We were waiting for the channel to figure out what they actually need from us, versus assuming we know what they need,” says Eric Hembree, director of IoT solutions for the U.S. at Ingram.

The time to move though, Hembree and others believe, has arrived at last. Following internal deliberations that began early this summer, Ingram officially launched its U.S. IoT organization in August, and tasked it with delivering solutions simple enough for partners without much prior experience to buy, implement, and support successfully.

“For a lot of them, IoT’s scary,” Hembree observes. “They view it as this big, scary monster that’s underneath their bed, and we want to peel back those curtains a little bit and show them it’s not that hard.”

The distributor is pursuing that goal in two principal ways at present. For enterprise partners and channel pros with advanced capabilities, it’s introducing IoT kits in partnership with vendors like Cisco, IBM, and Hewlett Packard Enterprise. Stocked with all of the hardware and software required to power a complete, function-specific solution, those offerings require some degree of pre-production integration.

For SMB-focused partners with less sophisticated skills, Ingram is offering end-to-end IoT solutions that come ready for use right out of the box. An asset monitoring solution from Roambee Corp., of Santa Clara, Calif., is a representative example.

“That’s soup to nuts, ready to go, and easy to consume and deploy,” Hembree says, noting that partners can even outsource the deployment part to Ingram if they choose.

In development now as well is an e-commerce platform for IoT solutions based on CloudBlue, the cloud marketplace platform Ingram officially introduced this spring. Initially, that system will allow partners to order a limited selection of simple, pre-defined solutions. Eventually, according to Hembree, it will also offer more powerful automation and integration functionality, and let users procure accompanying professional services as well. “We want it all in the centralized dashboard,” he says.

An IoT-as-a-service program is on the way from Ingram too. Like the device-as-a-service equivalent Ingram first introduced two years ago, that offering will enable end users to pay for IoT solutions via monthly subscription payments rather than big upfront checks. With the help of Ingram’s finance organization, however, partners will get their share of the deal in one lump sum immediately.

Further down the road still are more complex analytics solutions designed to help businesses derive actionable insights from the reams of data Ingram’s IoT kits and end-to-end solutions are collecting for them. Developing those offerings will take time though, Robinson warns. “That’s a journey,” he says. “It’s not something you can rush into.”

Hembree’s priorities for 2019 are more modest: adding market development, inside sales, field support, and other staff to his still young team. He’ll also be rolling out more resellable solutions from vendors Ingram already works with and adding more vendors to that club.

“We want to further build out our line card and bring on more vendors,” Hembree says. “We’re not done. We have a lot more to go.”