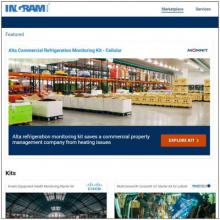 Ingram Micro Inc. has launched an online Internet of Things marketplace for its integrator and solution provider partners.

The Irvine, Calif.-based vendor introduced the site in conjunction with its annual Cloud Summit event in San Diego.

Officially available this week in the U.S., with global availability set for the future, the new resource provides self-serve access to products, kits, and end-to-end solutions from over 30 vendors across a range of verticals. Showcased vendors include Amazon Web Services, Cisco, Cradlepoint, Hewlett Packard Enterprise, and Microsoft. Targeted verticals include retail, healthcare, smart buildings, smart cities, and industrial IoT.

Kits available through the marketplace come with bundled components for performing specific tasks. “We have a number of more advanced resellers who like that idea of prepackaged components that have already been optimized,” notes Eric Hembree, Ingram’s director of IoT. “It’s open to them to create their own solution from that.”

At present, kits listed in the marketplace encompass a mix of offerings developed by Ingram Micro itself and its vendor partners. According to Hembree, Ingram will soon begin augmenting its contributions to the catalog significantly.

“We recently hired a solution architect who has really been getting his hands dirty as far as putting together and optimizing various individual components from big players like Cisco, HPE, and Aruba,” he says. “You will start to see that over the next few weeks.”

Integrators who prefer to leverage complete, pre-assembled solutions rather than kits can choose from a library of more than 40, most of which have been supplied by vendors. Ingram has a set of homegrown solutions on the way, however.

“We’ll continue to map them out and add them to the marketplace,” Hembree says.

Information about advisory, design, and training services are available through the site as well. “We have a number of professional services and assessment offerings specific to IoT, and right now this is kind of a landing page to talk through all of that,” Hembree says. In the future though, he continues, users will be able to order services through the marketplace too.

Providing services to partners who need them is a core element of Ingram’s crash plan to assemble an army of market-ready IoT integrators. “We want to identify any potential gaps that our partners have that are preventing them from selling IoT solutions today,” Hembree says. “No matter what gap or perceived lack of knowledge they have, we can help them out, we can augment that for them, so that they can win deals today versus waiting.”

According to Hembree, Ingram has been working on the IoT marketplace for over a year. Ease of use was the top design priority during that process. “If it’s something that’s not intuitive, it’s not going to be widely adopted,” Hembree observes.

The new site also reflects extensive input from integrators. “Every time that we speak to partners, we talk about the technology side and the enablement side and the solutions they want to understand,” Hembree says. “That’s how we have it broken down in the marketplace, so it’s really going to resonate with them, and when they see it it’s going to be very intuitive.”

Ingram plans to refresh the site to reflect a newly created set of style guidelines shortly. “This is version 1.0,” Hembree says. “In a few short months, you’re going to see a noticeable change in the way it looks.”

Ingram Micro’s ONE Conference last October was the unofficial coming out party for the distributor’s IoT strategy. Since then, the company has been recruiting integrators and solution providers to join it in taking on the IoT opportunity, which IDC says will be worth $745 billion this year.

“A lot of the discussion since ONE has been having those deeper conversations with our partners and identifying the ones who are ready to build out an IoT practice,” Hembree says.

Partners who qualify have access to a variety of training resources, including Ingram’s IoT University, which offers a variety of interactive e-learning courses. “We also have a certification program,” Hembree says. “It’s three days in person. You get a breadboard and you build your own sensor on it, and then you stand it up in an IoT platform.”

Enablement programs like that are an essential precondition to building a viable, effective IoT business, Hembree notes. “You could go to market with a thousand different solutions that are flashy and have the big names backing them, but partners aren’t going to sell them if they don’t know how to,” he says.

Hembree’s team has been spreading the word about Ingram’s IoT portfolio internally as well. “As you can imagine given how big we are, that takes a lot of at-bats with a lot of repetition to drive that messaging about who we are, how we operate, what’s our go to market, and how we’re engaging with our partners.”

According to Hembree, it’s no coincidence that Ingram’s IoT marketplace debuted during the Cloud Summit event. “I don’t think that you could have IoT without cloud,” he notes, adding that the marketplace runs on Ingram’s CloudBlue platform. “Why reinvent the wheel when we can leverage what’s already been built?” he asks.

Though the marketplace doesn’t yet utilize CloudBlue’s backend invoicing functionality, that will change in the months ahead. “I would say definitely look for something this year,” Hembree suggests.

Also coming this year are joint solutions and go-to-market initiatives involving prominent but as yet unspecified IoT vendors. “You’re going to see a number of strategic partnerships that we have been working on behind the scenes with some big players,” Hembree says.