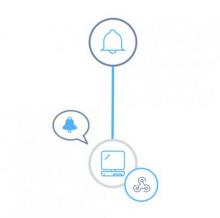 Domotz Inc. has equipped its network management solution for Internet of Things hardware with technology designed to help users more easily create automatic service tickets in their PSA solution whenever a device experiences a technical problem.

Called webhooks and released roughly six weeks ago, the new offering gives MSPs a simpler way to view and act on issues affecting video cameras, smart bulbs, web-based thermostats, and other IoT systems through the same interface they use to resolve PC and server issues. It augments previously introduced functionality that lets users import data from emailed alerts into their ticketing platform. That feature, however, requires ticketing systems to check continuously for new emails, according to J.B. Fowler, chief revenue officer at Domotz.

“Today with webhooks, Domotz pushes a notification through to them,” he says. “It’s a little bit faster and it’s more efficient.”

Users must deploy a brokerage program between Domotz and their PSA platform to take full advantage of webhooks-enabled automation. Both custom-developed brokers and third-party products such as Zapier and IFTT are options for that function, which receives alerts via webhooks from Domotz anytime a monitored device has an issue. The broker then automatically uses the Domotz API to collect additional information about the problem and export it into a service ticket.

Direct integration into ticketing systems without a broker will be available for users of ConnectWise Manage and Zendesk in the future. The Domotz system integrates directly with Slack already.

According to Fowler, Domotz customers have long utilized customized, often elaborate processes to import data from alert emails into their ticketing software. One company in particular created a system that automatically directed emails to device-specific aliases. Software then searched those messages for pre-defined keywords and used the information it found to create and appropriately prioritize tickets in Salesforce.

“Every time that they would deploy an agent, they would have to set up a new set of alerts and make sure that it was going to the right email alias,” Fowler says, noting that webhooks enables the customer to generate tickets with significantly less coding and complexity.

Webhooks are available free of charge to Domotz customers on the vendor’s top-end Premium plan. Email alerts remain available to users on all three of the company’s pricing tiers.

Over 3,000 companies use the Domotz platform to manage more than 20,000 networks worldwide. Most of the technology providers in that contingent work in the physical security, home electronics, or audio-visual markets, but Domotz is now actively courting managed IT service providers as well.

According to Fowler, the Domotz application has both strengths and weaknesses in relation to other network management systems available to MSPs today, including Auvik and Kaseya’s Traverse product. Those offerings include Windows management capabilities that Domotz doesn’t currently support, for example. “We do some things with respect to video systems, including video security and unified communications as well as voice over IP and network diagnostics, that they don’t do,” Fowler says.

Domotz is priced more affordably as well, he contends. The Premium plan currently sells for $19 per site per month.

Thanks to its roots as a system for managing hardware other than desktops, laptops, and servers, according to Fowler, the Domotz solution is better suited than most of the tools MSPs use today for discovering and managing Internet of Things devices. That, he continues, makes it an ideal complement to RMM systems, most of which can’t see or support IoT hardware.

“They are much more tightly focused on the network and patch management of PCs,” Fowler says of RMM products. “As an IoT monitoring tool, we sit very well with respect to those other tools that are out there.”

Indeed, most MSP users of Domotz software will run it alongside their current RMM platform rather than as a replacement, according to Seth Rubenstein, the vendor’s partner engagement officer.

“Invariably, they’re going to want something that can see broadly and go deep in certain areas where maybe we don’t, but maybe we can augment those platforms,” he says.

How LoRaWAN and AI at the Edge Revolutionize the IoT